The Berry Boys is a documentary produced for TVNZ in collaboration with TVOne’s Sunday and Te Papa and with funding from NZ on Air. The documentary screened on TVOne on Sunday the 3rd of August 2014, at 10:30pm and again on Sunday the 10th of August at 11:55am 2014.

Do You Know These Faces? 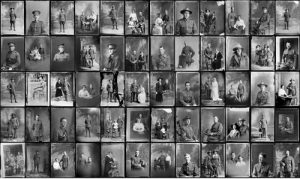 Between 1914 and 1918, dozens of photographs were taken of young men about to embark on a journey they would never forget and in some cases never return from. In the 1990s, these photographs were found in a cupboard by one of the tenants of 147 Cuba Street, Wellington. This was the former premises of Berry & Co, well-known Wellington portrait photographers, established in 1897 by William Berry.

The soldiers would have given these portraits to relatives and loved ones as mementos and keepsakes. Some would later be poignant and precious reminders of men who died overseas, but whose bodies were never recovered.

Now, this collection is carefully looked after by the Te Papa museum and their staff who are trying to find out who these young men were and what happened to them. ProductionShed.TV has told six of the soldier’s stories in our documentary.

This 44 minute documentary explores the lesser known stories of the war years, collected from the relatives of the Berry soldiers. Expertly integrated with animatic retellings from graphic artist Tim Gibson, and music composed and directed by Barnaby Weir with inspiration from war poetry, the descendants of a selection of the Berry Boys will be the speakers for the dead.

ProductionShed.TV began the project with a call out on the Sunday programme asking the nation to help identify the unidentified soldiers in Te Papa’s collection. See Sunday’s item on the Boys here.

Animation Director Tim Gibson and Director/Producer Yvonne Mackay discussed the documentary live on the Good Morning Show on the 31st of July, 2014.

The Berry Boys documentary screened on Sunday the 3rd of August, 2014 at 10:30pm on TVOne and again the following year on ANZAC Day at 4pm.

It also won an Award of Merit at the IndieFEST, USA, a Bronze Remi Award at the 48th Annual Houston Worldfest, and has been officially selected into competition at New Zealand’s DocEdge Festival, 2015.

See more of our work